There is a hidden killer in relationships. It is the perpetual disempowerment of your partner through emasculation. 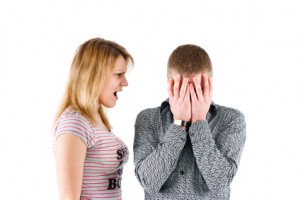 Emasculation is depriving your partner, and other men in your life, of their strength and power and making them weak.

What emasculation looks like is a man becoming unmotivated or unable to function effectively in the relationship and in the world. Emasculation is most often done unconsciously but it can be done intentionally too.

Emasculation breaks men down so they have lost their power to function, to provide and protect, and of their virility.

We do this by criticizing men and not empowering them to be the providers and protectors they are driven to be. And it’s not just you, male bashing is a prevalent disease in our culture.

Why? Because we think of strong men as dangerous. What we don’t understand is that strong men are also protectors. They love to contribute to us when what we need is clear and we receive it well.

10 Ways we emasculate men and what you can do instead:

1. When we’re frustrated, we tend to criticize. So get clear on what you want and learn to express it the way he can receive it.

2. When we get into a relationship we try to fix our man and shape him into what we want. Instead, learn about men and accept him as he is.

3. When we are upset, we tend to complain. Instead, let him know what you need.

4. When we’re upset, we let him know it, by telling him how we feel. Instead, tell him what you appreciate, and then let him know what you want instead.

5. When we want to let him know what we want, we often compare him to other men who are doing what we want. Instead, be clear about what you want instead of giving comparisons.

6. When we’re frustrated, we tend to treat him like a child. Instead, respect him as an adult, and he’ll act like one.

7. When we aren’t getting our needs met, we tend to distrust his ability to take care of us so we take over. Instead, let him know that you believe in him.

8. When we’re upset we tend to pull away and act like his presence doesn’t matter. Instead, let him know you are still there and love him and his presence is important to you.

9. When we aren’t getting what we need in our relationship we tend to withhold attention. Instead of pulling away, let him know what you need and stay present.

10. When we are upset, we tend to act like his needs don’t matter. Relationships are about partnership, both of your needs matter, so let him know you value what he needs too.

Men and women are wired differently and if you don’t understand those differences, you’ll be speaking different languages which will end up in frustration.

Take the time to learn about your partner and how he operates in the world. Learn what you can do to create a win/win relationship by requesting a Relationship Breakthrough Session now.